Our Lady of Guadalupe Retreat

Tour Packages to Turkey Year-round are available. Call us for details.

Wonders of India and the Mighty Himalayas! 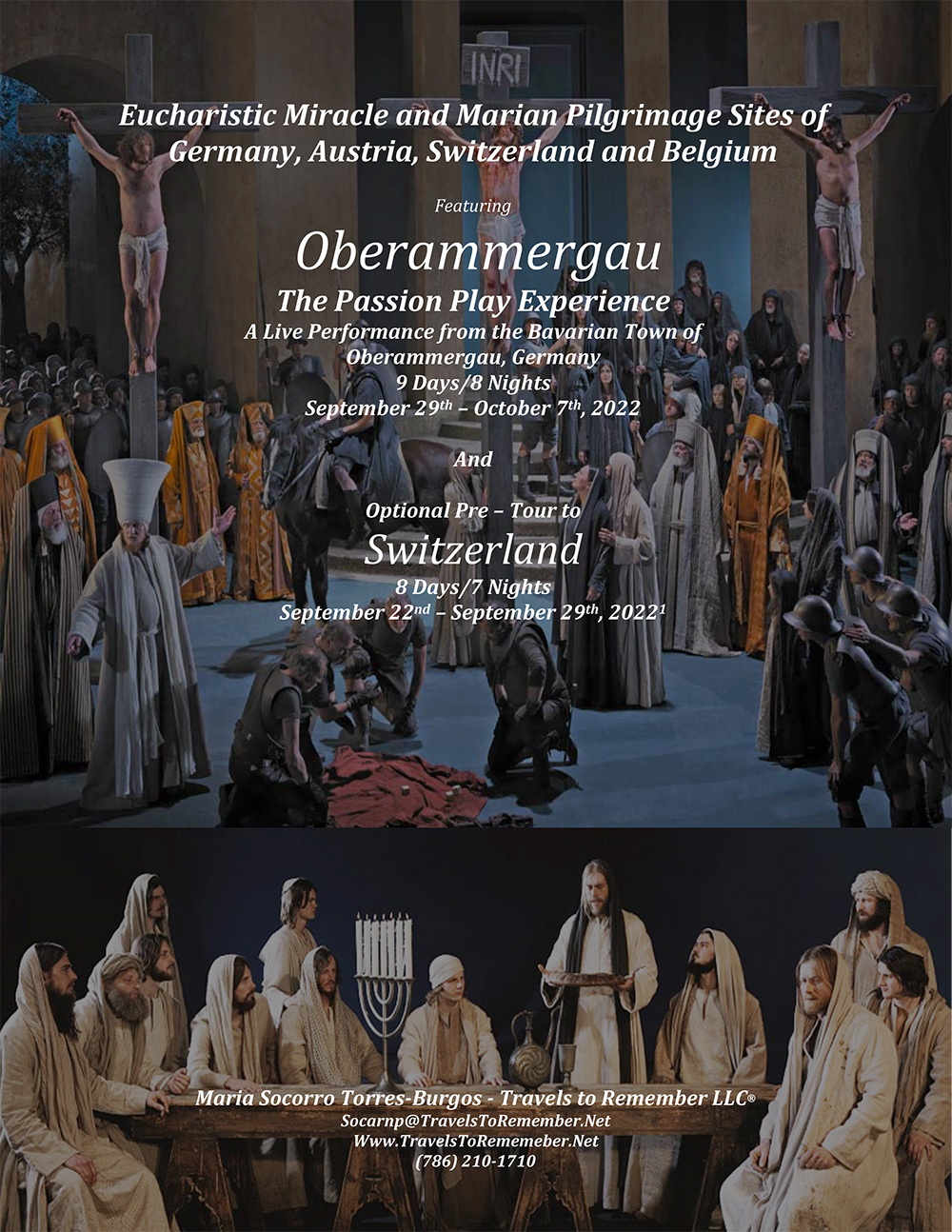 Eucharistic and Marian Pilgrimage Sites of

In 1633, when the small Bavarian village of Oberammergau was in the grip of the Plague, its inhabitants vowed that if they were spared, they would in future perform a Passion Play every ten years depicting Christ's bitter suffering and resurrection. In 1634, the villagers fulfilled their solemn promise for the first time. For hundreds of years since, despite dangers and threats, they have loyally kept their vow.

The Play shows Christ's Passion, beginning with his entry into Jerusalem and ending with the Resurrection and Transfiguration. The cast and crew - composed entirely of local villagers - perform this iconic story with powerful inner conviction. Although the text and music have been adapted many times over the years, the traditional concept remains intact. With its living pictures from the Old Testament and acted scenes from the New Testament, the structure of the Play has been retained to this day. The last significant changes to the text of the Passion Play were made between 1850 and 1860 by the parish priest of Oberammergau, Alois Daisenberger, building on the work of Father Othmar Weis. The music for the Play was composed in the early 19th century by the Oberammergau school teacher, Rochus Dedler. Revised and extended in 1950 by Professor Eugen Papst, it employs a large choir and orchestra and frames the entire spectacle.

Pilgrims from all over the world have been captivated by the Play, a testimony of religious faith and an outstanding cultural event.

Once every ten years, the Oberammergau Passion Play attracts hundreds of thousands of visitors from all around the globe. Inhabitants of the village in the Ammer valley already have to apply and have themselves registered for participation in the next Passion Play. A total of 1,830 of them followed the call of the Oberammergau municipality and declared their interest in participating. For the first time in the almost 400-year- history of the play, an equal number of men and women wish to take part. Compared to the last Passion Play in 2010, the number of applications remained consistently very high. Participation in the play is regulated by the 'playing right.' Not all of the 5,200 inhabitants of Oberammergau are allowed to take part.

The playing right stipulates that candidates have to be born and raised in Oberammergau or live in the village for at least 20 years. It is estimated that in 2022 more than 500 children will take part as well; however, their number will be determined at a later date. In total, the number of participants in the Oberammergau Passion Play will once again be exceeding 2,000.

The playing right for the Oberammergau Passion Play has always been subject to change. For instance, until 1984, married women and women over 35 were excluded from participating. Following a rejected famous charge, three women of Oberammergau invoked the Bavarian Constitutional Court again in 1988. In 1990 the court ultimately decided that it was illegal to deny women the right of participation in the Passion Play.

For the Passion Play in 2000, the playing right was changed yet again. Until then, any participant had to belong to a Christian religious community. Ever since 2000, even undenominational citizens and members of other religious communities are allowed to take part. Thus, this year saw the first people of Oberammergau with the Muslim faith participating.

Since 2018, preparations for the 42nd Passion Play under the direction of Christian Stückl have been well underway. One highlight leading up to the passion for every citizen of Oberammergau is the excellent church service on the large open-air stage of the Passion Theatre on 20th October of this year: The pledge of 1633 will be commemorated, and the actors of the 42nd Passion Play will be publicly announced and introduced. Aside from the primary roles of Jesus, Mary, Petrus, Judas, Pontius Pilate, and Caiaphas, there will be 120 major and minor speaking roles and soldiers, priests, and Jerusalem people. Rehearsals started in November 2019, lasting eight months and involving more than 2,000 people. However, due to the COVID pandemic, the 2020 passion play was canceled and had been postponed to 2022, the year 1633 when the people of Oberammergau pledged to act out the suffering and death of Jesus Christ in The Play, goes back to a pledge of 2015 Indochina Tour Itinerary exchange for no further Plague deaths.

To be in the play, you must be a resident of Oberammergau. Over 2,000 citizens are involved, including acting, singing, musicians, and technical support. There are 124 speaking roles, a 65-member orchestra, a 48-person chorus, and hundreds of people involved in the back end, including stagehands, seamstresses, firemen, auditorium attendants, and more. Men grow their hair and beards to make them look authentic to the time. Costumes are hand-made. The play is held from May through late September or early October. During these months, the play is performed five days per week in an open-air theater that seats about 4,700 people. The performance begins at 2:30 p.m. to 5:00 p.m. There is then a dinner break, and then play resumes from 8:00 p.m. to 10:30 p.m. The play is performed in German, but it doesn't seem to stop people from all over the world, including those not of religious backgrounds, who are intrigued by how the town comes together to perform this play. It is anticipated over 750,000 will attend in 2022. The Passion Play theatre is open, and the background of the mountains makes it an unforgettable scene

The world-famous Passion Play in Oberammergau, traditionally held every ten years, will take to the stage once again in the summer of 2022. The performances will run from mid-May through late September or early October, with five versions each week. The performance commences in the afternoon. After a break for dinner, the second part of the Passion Play continues into the evening.

In a great community effort starting in Autumn, new costumes and set designs designed by Stefan Hageneier will be made. What is more, 120 new choir members and the 70-member-passion orchestra must be re-cast in the next few weeks upon instruction by the music director Markus Zwink. The five-hour performance with its three-hour-break begins in the afternoon with the entry into Jerusalem and tells the passion story from the Last Supper to the crucifixion. It ends in the evening hours with the resurrection. 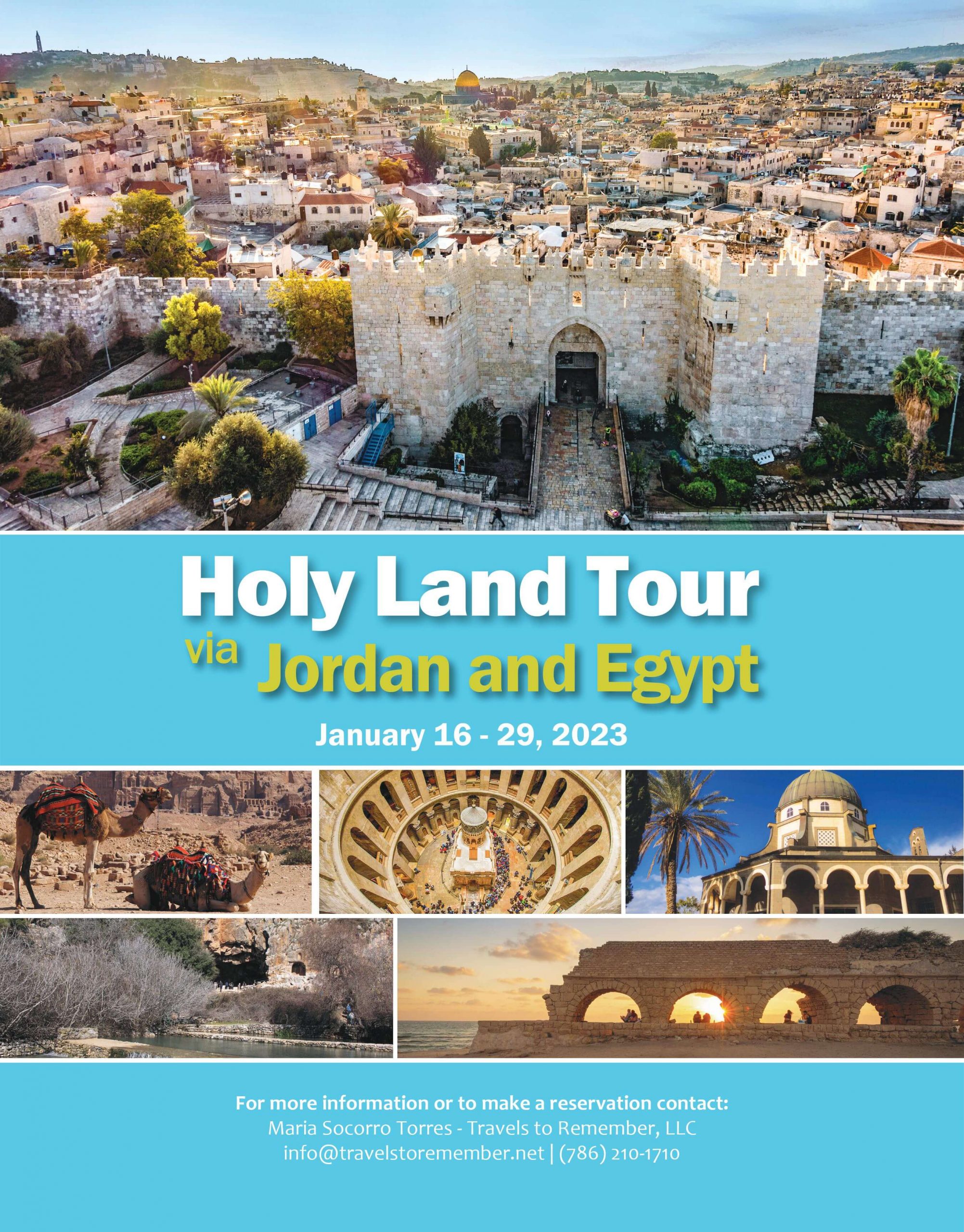